What is the difference between Martial Arts and Self Defence?

It is better to ask, “what are the similarities between Martial Arts and Self Defence” as the techniques used in all forms of “combat training” come from the same source.

I joined a traditional karate dojo in 1983 because I wanted to immerse myself in the history of karate and learn the techniques that other students, hundreds of years ago, had learned from their Sensei. I felt, and still do, that learning the traditional techniques would give me a greater understanding of “why” the students executed the techniques as they did, and thus I would learn the “how” of the technique.

I opened my dojo in 1991 teaching traditional karate to children. As new generations of children came through the door I had to change the way I taught. I still taught the same techniques but had to adapt how I taught them to capture the attention of the new generation of children. Now, in 2020, I have had to change again, only this time I am incorporating practical Self Defence into all classes.

As I oversee the traditional Martial Arts techniques and the practical Self Defence applications in my dojo, I feel I am in an excellent position to answer the question.

The perfect student would be one who learned the basics from traditional Martial Arts training and also mastered the practicalities of modern Self Defence applications.

This brings me to the Sensei. As instructors we all lead by example and so our beliefs and execution of technique can be seen in our students. If we are competitive then our dojo is competitive and so are our students.

To me, learning traditional Martial Arts basics is vital in the development of a student. This is where the adage, “you have to learn to walk before you can run”, applies. There is no point doing a short Self Defence course if you don’t know how to stand, use weight distribution, how to punch and, more importantly, when to run away.

Let’s look at one technique from the traditional Martial Arts perspective – the punch. My training was in Goju Ryu karate and so we executed the punch from the full pull back position with shoulders down, chest out, stomach tight and fist upside down against the waist, with elbows tucked into the body. Some call this the “chamber position”. 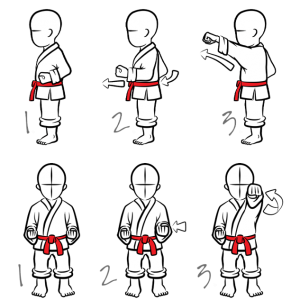 Unless you understand the mechanics of the punch it is impossible to use it correctly or effectively in a Self Defence scenario.

Learning how to do the punch correctly takes many years of practice. Although the outward appearance of the punch seems the same for a beginner as for a black belt, there are a lot of aspects that the beginner is yet to grasp. Body posture, centre of gravity, distribution of weight, point focus, power and recovery are all “hidden” understandings of the perfect punch.

Now let’s look at the punch from the Self Defence (practical application) perspective. The punch for a Self Defence practitioner is more like a boxing punch in that the elbows float away from the body, the head is tucked down with the fists raised to protect the face and upper body. The punch is a fast, snappy action executed on the move, usually as the student moves in towards the attacker. The student does more than one technique and is not reliant upon the punch alone.

If you compare the Martial Arts punch and the Self Defence punch I would say you can’t have one without the other. By that I mean to execute an effective punch you need to learn the basics first and then adapt them.

A Martial Arts punch is a thing of beauty. It is clean, smooth, fast, hard and powerful. The body remains still while the punch appears from nowhere. There are no outward signs that a punch is about to be delivered. The face remains passive and the practitioner remains calm, seemingly without breathing, and there is no indication of the punch until it arrives. A good student will use their inner power (ki) when delivering a punch. You can’t see it, but it makes the punch extremely powerful.

The Self Defence punch is a bit messy (or dirty) in appearance. It is there to get the job done. There is not much finesse (“just punch the damn thing”, an old instructor of mine used to say), but it is effective. A Self Defence punch throws the entire body into it. All the practitioner’s strength is behind the punch. This is the same as for the Martial Arts student although their punch is more controlled, a bit like a coiled spring.

I say the good punch is one that is taught correctly and practiced well.

We are all built differently and adapting to situations to suit our size and shape and age is part of training. I had a neck fusion operation a few years ago and so I have to move my body more when I do a punch. It doesn’t mean that my punch is any less effective than a Self Defence students’ punch. It might not look as pretty as it used to look but it still works…and works well.

I think there are more similarities between Martial Arts and Self Defence than differences. As instructors and students, we should learn to harness the strengths of both.

We can grow in our understanding of practical Self Defence while staying true to our traditional roots.